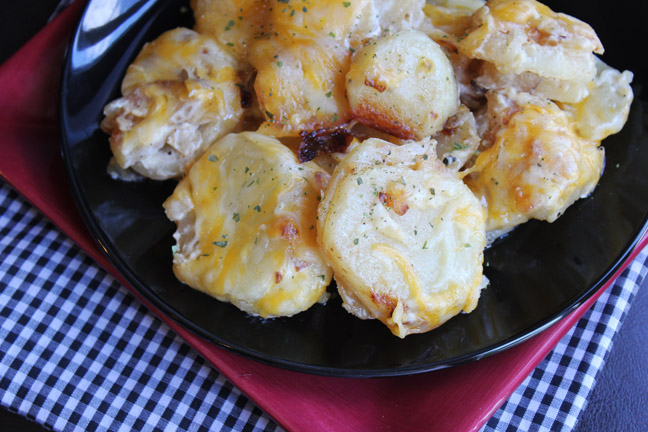 “What kind of great camping and dutch oven recipes do you have?”

To which I am forced to reply with a truthful…

“None. Thank you for asking.”

Not that I don’t love a fine meal made in the dutch oven, the plain truth is…we don’t generally camp, or even own a dutch oven. I know, a darn and ugly shame. However, I have as of late found myself in the midst of dutch oven cooking. A couple of weeks ago I went on a Pioneer Trek through the dusty (and oh so VERY hot) Wyoming wilderness with 300 youth and 100 adult leaders. No running water, no electricity, no structure of any kind for 4 days and 25 dusty miles. 🙂 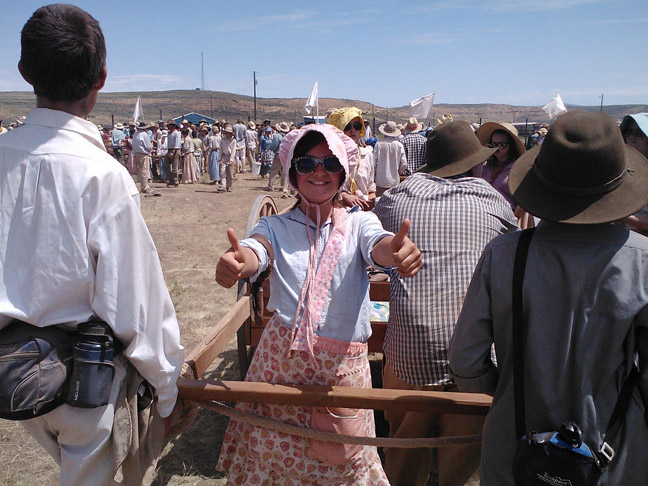 It sounds kind of strange doesn’t it? It was actually really amazing to be part of, though I have never in my whole life been so filthy dirty, tired and hot. The temperatures were record high and we felt it, baby. It was like a fiery furnace wrapped up in a dusty breeze.

But the kids were awesome, truly. They pulled hand carts the whole way and for the most part had stellar attitudes. 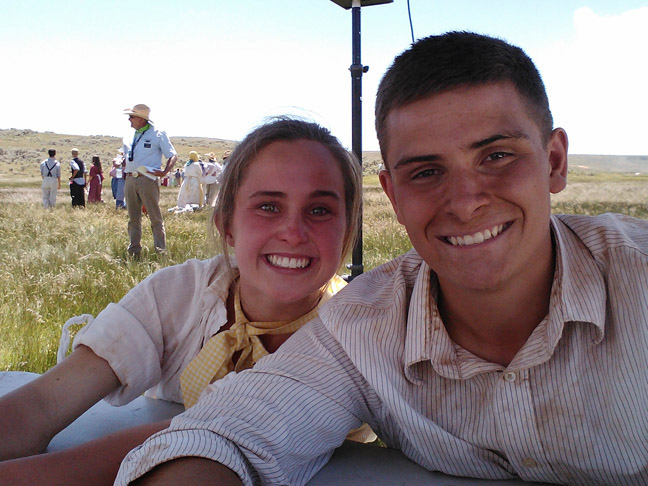 This is my son Mark (ok, did I mention it was really dirty! It was…) and his cute friend Addy. Look at those smiles, the kids were so great to be with. Being with so many wonderful people, all working hard together was so cool. The best part, really. 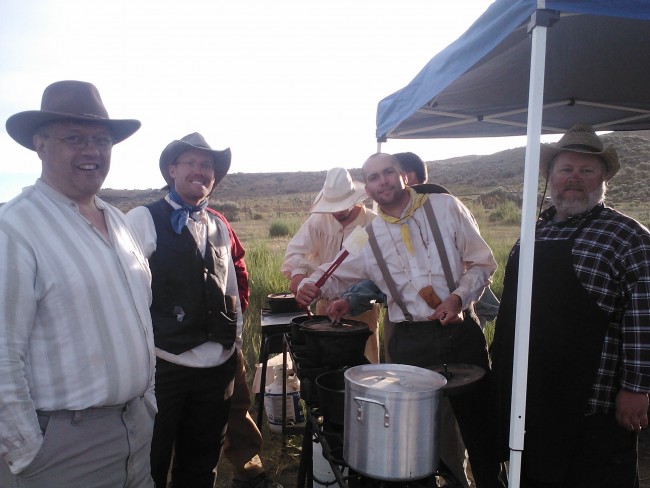 I was assigned to work as part of the food committee and learned a ton about feeding masses of people, and doing it in the wild wilderness.  (Dutch ovens galore!) If you and I and 400 of our friends were dropped off in the middle of no where we could totally survive, man. But only if I had a propane, a camp chef, a few dutch ovens and a refrigerated trailer. 🙂 Oh, yes and food.

After MyTeenSonMark and I braved the Pioneer Trek, our family went to Bear Lake to play with some dear friends. 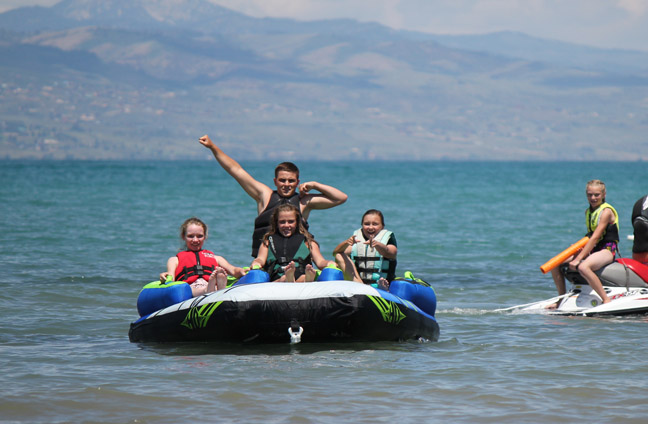 These kids are a little less dirty in this environment, wouldn’t you say? 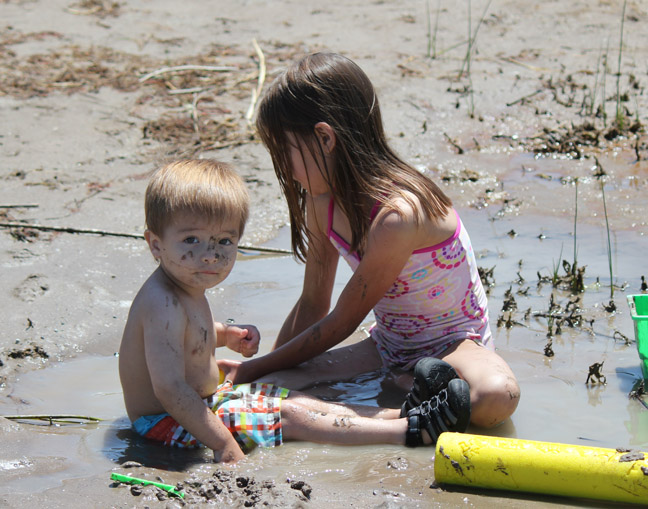 Ok, maybe just those who swim in the water. 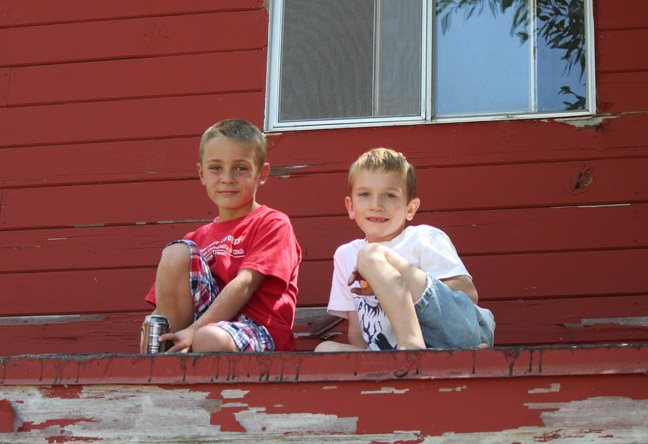 It was a great time. 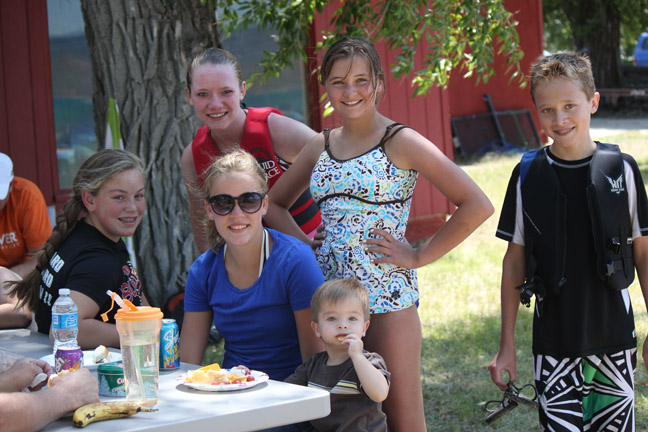 You can’t beat great Bear Lake weather and dear friends to share it with. 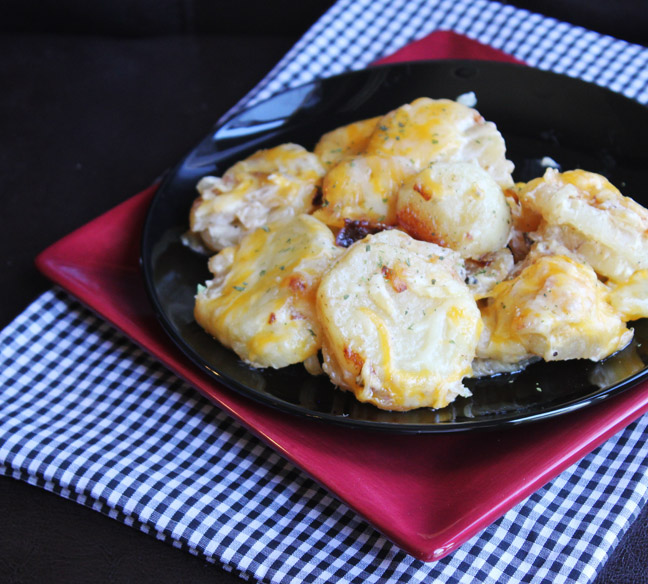 My dear friend Mike Anderson made the most fabulous Dutch Oven Cheesy Potatoes while we were at the lake. They are packed with the flavors of bacon, onions, butter, sour cream and heavenly melted cheese. Man, they are so good. He was gracious enough to let me take some photos while he was cooking them up, so I could share them with you. If you don’t have a dutch oven, these can also be prepared on the stove top (which is what I did when I got home, so I could take a few photos of the finished product for you all).

Now, without further ramblings (thanks for your patience) let’s make them! 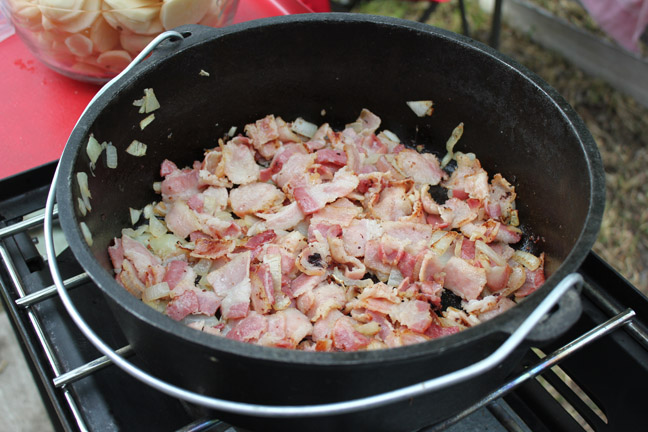 1. Peel and slice 8 pounds of russet potatoes.
2. Heat a dutch oven up over medium high heat.
3. Toss in 10 slices of bacon that have been chopped.
4. When the bacon has cooked for a few minutes and  there is a bit of grease in the bottom of the dutch oven, add the chopped onion. Let these two cook until the bacon is slightly crisp and the onions are almost translucent. 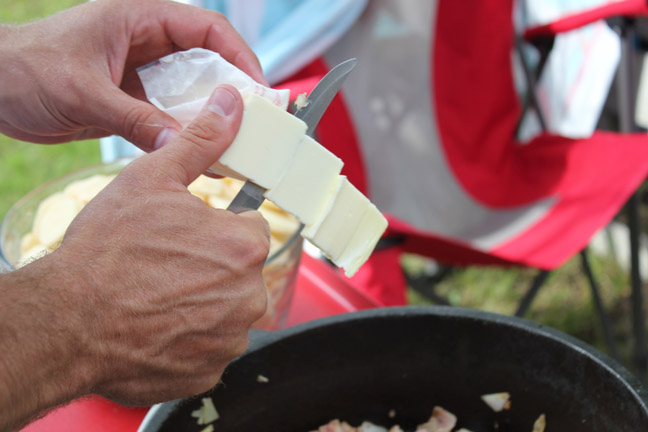 5. Add 3-4 tablespoons of butter. Stir it around and let it melt into the bacon and onions. 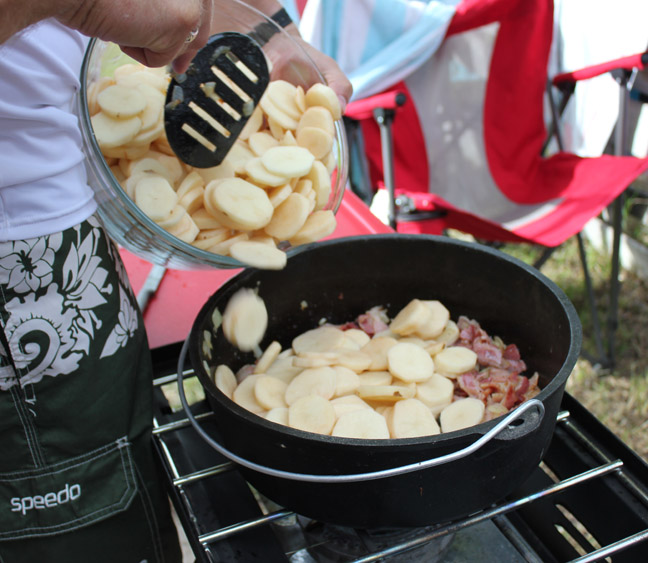 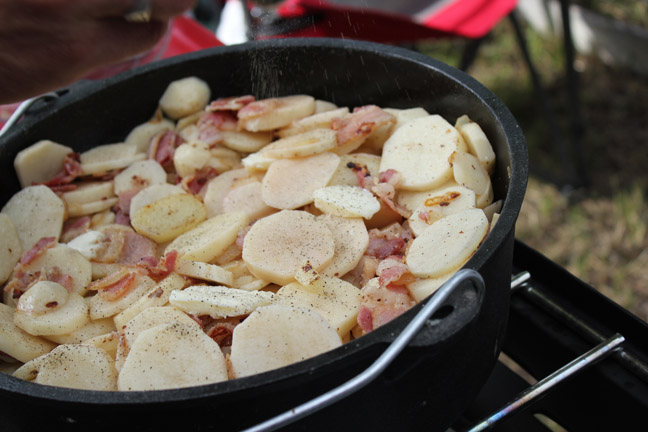 Give everything a nice stir to incorporate. Add 2-3 more tablespoons of butter and a generous helping of salt and pepper. Stir it all up again so everything is evenly distributed. 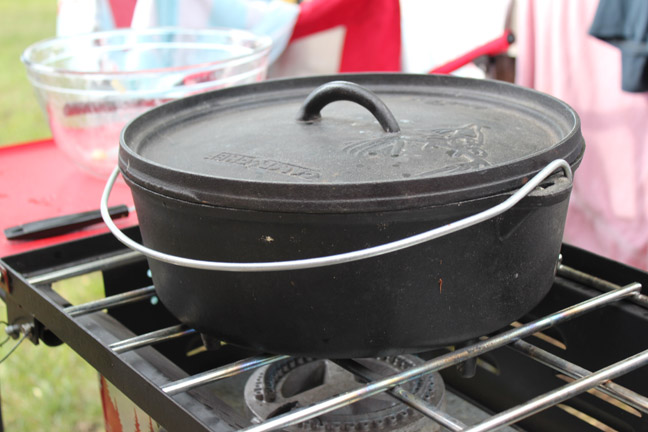 Put the lid on and let the potatoes cook through. This should take about 20 minutes, depending on the weather (cross your fingers and pray for no wind, won’t you?) Also, make sure that you lift the lid and stir things up a couple of times while they cook. Especially watch the potatoes that are on the bottom of the pan, so they don’t burn. 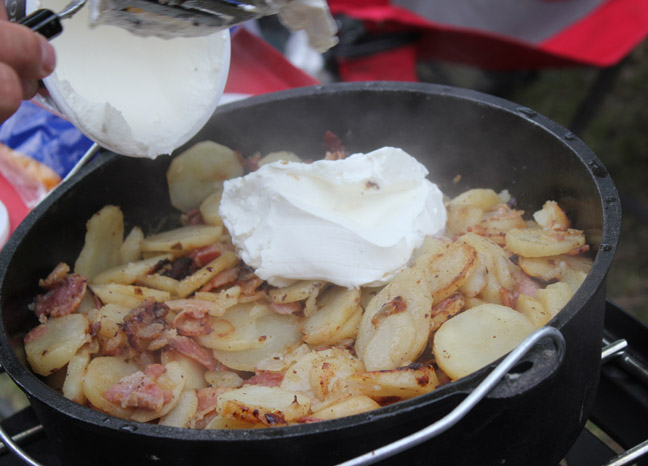 7. When the potatoes are fork tender add 1 (16 ounce) container of sour cream. Give it a nice stir. 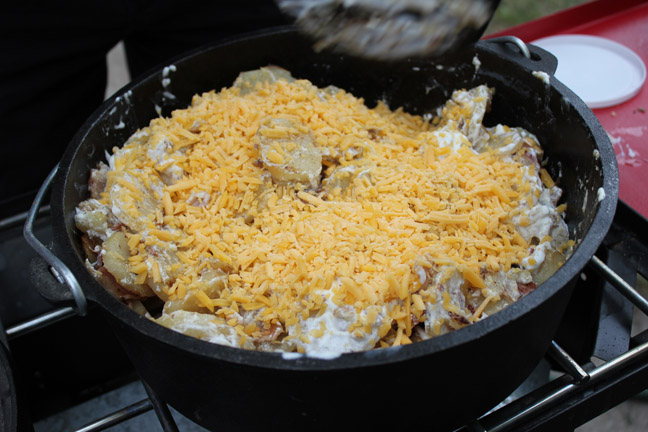 8. Sprinkle 2 cups cheddar cheese over the top. Place the lid back on the dutch oven and remove it from the heat. Once the cheese has melted and sour cream is heated through you are ready to dig in. 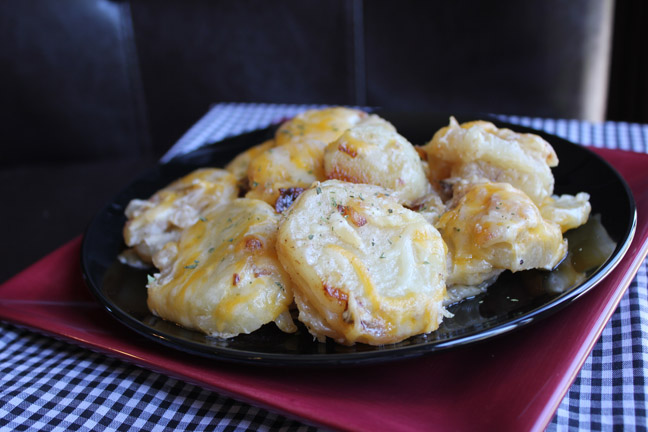